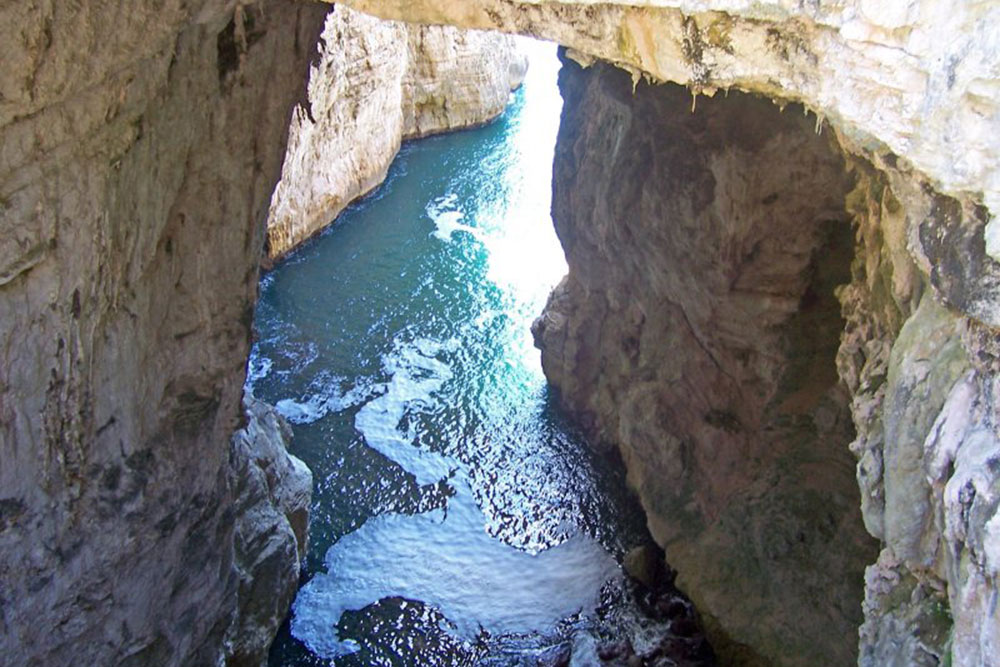 The “Montagna Spaccata” (broken mountain) is one of the most suggestive spot of Gaeta, visited each year by tourists who are enchanted by the three cracks of the mountain. The place encloses a beautiful itinerary.

The Sanctuary of Holy Trinity, built in XI century, is known in history because here had prayed numerous popes, among which Pio IX, kings, bishops and saints, among which Bernard from Siena, Ignatius of Loyola, Leonard from Porto Maurizio and Saint Philip Neri. Just 18 km from Sperlonga, the legend says that Saint Philip Neri lived inside the Montagna Spaccata where is a stone bed still today known as “the bed of Saint Philip Neri”. On the rocky walls is possible to admire some majolica paintings representing the stations of Via Crucis dating back to 1849 and ascribed to Bernard from Siena.
Obviously the itinerary contemplate even a visit to the suggestive “Cave of the Turkish”, linked to an ancient religious tradition, according to which it was created at the death of Jesus, and to various other folk beliefs. Among these latter there is the one talking about the handprint of a turkish sailor on a rock.
Along the stair leading in the heart of the mountain, along the tight crack in the rock, on the right, you can admire a latin inscription and above it a creepy handprint imprint in the rock. The legend says it belonged to a turkish sailor, not catholic and skeptical about the origins of the sacred cracks of the mountain. But as soon as he puts his hand on the rock that melted immediately leaving the detailed imprint of his hand, still visible today.
The setting of this particular natural environment do not exclude the possibility that in the cave, in the Middle Ages, find shelter some Saracen pirates waiting to attack passing ships to steal their cargo.